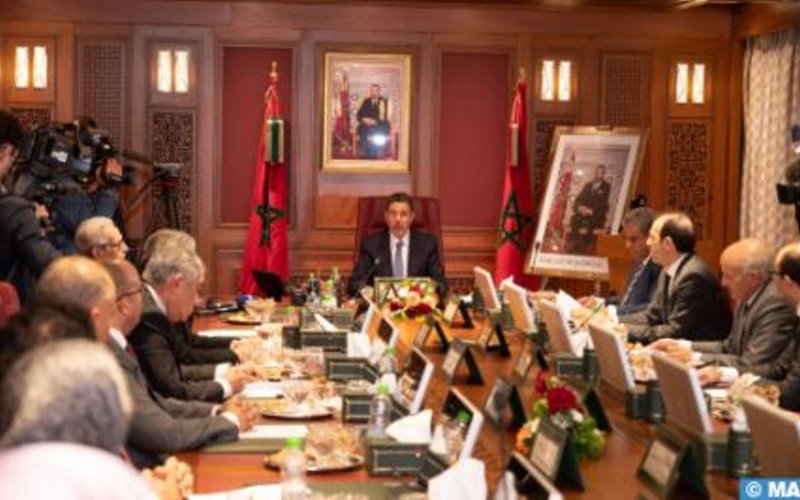 The Superior Council of the Judicial Authority (CSPJ) expressed on Saturday its strong condemnation of the unfounded allegations contained in the resolution of the European Parliament (EP) of Thursday, January 19, 2023.

In a statement, the Superior Council, meeting this Saturday, has taken note of the EP resolution which contains serious accusations and allegations that undermine the independence of the Moroccan judiciary.

These unsubstantiated allegations distort facts and sow doubts about the legality and legitimacy of the judicial procedures, some of which have been judged and others still under advisement reads the statement.

The Council expresses, therefore, its strong condemnation of the unfounded allegations contained in the aforementioned resolution.

It also regrets this distortion of facts in the context of trials that were conducted in accordance with the law, in full compliance with constitutional guarantees and conditions of fair trial as internationally recognized.

The Council vigorously denounces the approach adopted by the European Parliament, which has arrogated to itself the right to judge the Moroccan judiciary system in a blattantly biased manner, prejudicing the judicial institutions of the Kingdom and violating their independence, further notes the statement.

Moreover, The CSPJ utterly rejects any interference in the judiciary processes or attempts to influence their decisions, especially since some of the mentioned cases are still before the courts.

This contradicts all international norms and standards, including the principles and declarations of the United Nations on the independence of the judiciary system, the CSPJ indicates in the statement.

The Council strongly decries the call included in the resolution to put pressure on the judicial authority to immediately release the individuals it mentioned; and considers this a dangerous violation of the independence of justice and an attempt to influence the judicial authority, especially since some of the cases are still under court scrutiny.

On a different note, the Superior Council rejects the fallacies included in the resolution, which are inspired by certain sources notoriously known for their dogmatic positions, undocumented, unverified and refuted by the facts;

The statement further stresses that the individuals, mentioned in the resolution, benefitted from all guarantees of a fair trial in accordance with the law, including the presumption of innocence, the right to defence, access to all documents relevant to their cases, the right to a public trial, the summoning of witnesses and hearing thereof, judicial expertise, the right to appeal and all other guarantees provided for by the Moroccan law as stipulated in the international human rights charters endorsed by the Kingdom.

The Council stresses that facts subject to the trial of the individuals mentioned in the resolution of the European Parliament are in no way linked to their activities as journalists nor to the practice of their freedom of expression and speech, guaranteed by the law and the Constitution.

In this respect, the Judicial Authority underlines that the accusations levelled against these individuals are related to criminal law, including human trafficking, sexual abuse and the exploitation of other persons’ vulnerability. Such acts are severely punished by laws, all over the world.

The Council rejects the double standards that characterize this resolution, which instead of condemning the sexual assaults suffered by the victims, defends a series of untruths and unfounded allegations.

The Council reaffirms that Morocco has made, over the past years, important strides to enshrine the independence of the public prosecutor from the executive authorities since 2017, in addition to the consolidation of the independence of the judiciary set forth in the 2011 Constitution, paving the way for the creation of the Supreme Council of the Judicial Authority in 2017 in accordance with the most advanced international standards of judicial independence, that even some European countries are still far from achieving.

The Council stresses the magistrates’ attachment to their independence as well as to the protection of their rights and freedoms, and the guarantee of a fair trial, as a constitutional, legal and ethical duty.

The Council expresses its keenness to uphold its role to protect the independence of the judiciary against all interference and pressure wherever they come from in accordance with the Constitution and with its regulatory act, concludes the statement.