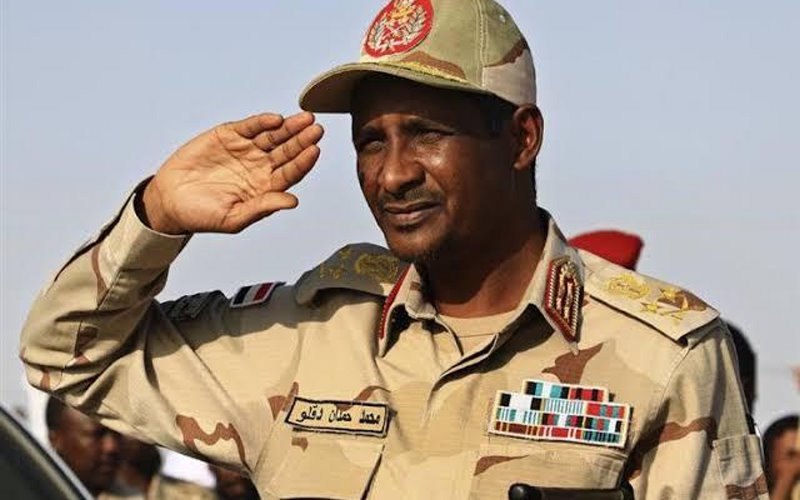 The Vice-President of the Sovereign Council of Sudan and leader of the Rapid Action Forces, Lieutenant General Mohamed Hamdan Dagalo, addressed a heartfelt appeal to the entire country, affected by a decade-long civil war, for peace, democracy, against discrimination and internal and internal threats.  A true call for national reconciliation.

The tribal conflict in southern Sudan has resulted in 105 deaths and 291 injuries in the past week, according to the new toll provided by the Blue Nile Ministry of Health. Vice President Dagalo, has stated that his government is ready to “go to war” because of the internal instability in the country that “threatens its very existence”.

Here is his call to the Nation:

The spread of the tribal conflict in Sudan is senseless bloodshed, and the rise of voices of hatred and racism will inevitably lead our country to collapse.  I will never be part of this disaster and I will not be silent.  We need to hold accountable all those who threaten our country and our people.  I am following closely and am fully aware of the internal and external threats our country faces.  I call on all honourable patriots of political, revolutionary and social forces to unite and work together to address threats and reach urgent political solutions.

It is time to focus and open our eyes to the incredible misfortune that has fallen on our nation.  Dear Sudanese people.  You may have seen the decisions made by the President of the Transitional Sovereignty Council: on July 4, the Commander-in-Chief of the Armed Forces, Lieutenant General Abdel Fattah Al-Burhan, through whom we made a commitment not to cling to an authority that it could lead to more bloodshed and affect the stability of our country.

We have thus decided, together, to give the opportunity to the revolutionary and national political forces to negotiate and reach an agreement without the interference of the military component, according to our role enshrined in both the Constitution and the law.

I therefore call on all revolutionary and national political forces to hurry up urgently to find solutions to establish a civilian-led government and finalize its institutions.

Dear Sudanese people, I will do my best to continue helping our country to overcome all challenges, extend a strong hand to pull it out of the brink and restore order and security.

My honourable Sudanese people, I have spent the last few weeks in Darfur and I will return again to continue my mission, implement and complete the peace agreement.  I was shocked by the mass destruction left over from years of war and marginalization, the level of conflict and strife still raging among the people in this region, the spread of poverty, the services provided to the population and the absence of a rule of law.

I have made a concerted effort, which so far has shown promising results, to end conflicts and promote the rule of law.  Together with our partners, I will continue to do the work they have started, as long as every inch of our country enjoys security and stability, so we defeat racism and hatred once and for all.  Given the great diversity of our people here in Sudan, we must put an end to all forms of discrimination.

All human beings are the same.  There is no difference between one or the other, one tribe or another, one race or another.  God created us from clay and we will return to God, who will reward us.  God will reward those who do good and punish those who have done wrong with their sins.

In conclusion, I reiterate my full commitment to safeguard the objectives of the glorious December revolution and to protect the transition period leading to true democratic transformation and free and fair elections, reform the military and security sector and implement the agreement. peace of Juba, including the provision of security arrangements that create a united professional army that reflects Sudan’s plurality and diversity, which preserves its security and sovereignty and repels all forms of aggression.

I also renew the appeal to our brothers who carry arms to join us in our movement for peace.  Long live Sudan, free and independent, and may God protect our country and our people. ” concluded the Vice President of Sudan, General Dagalo.