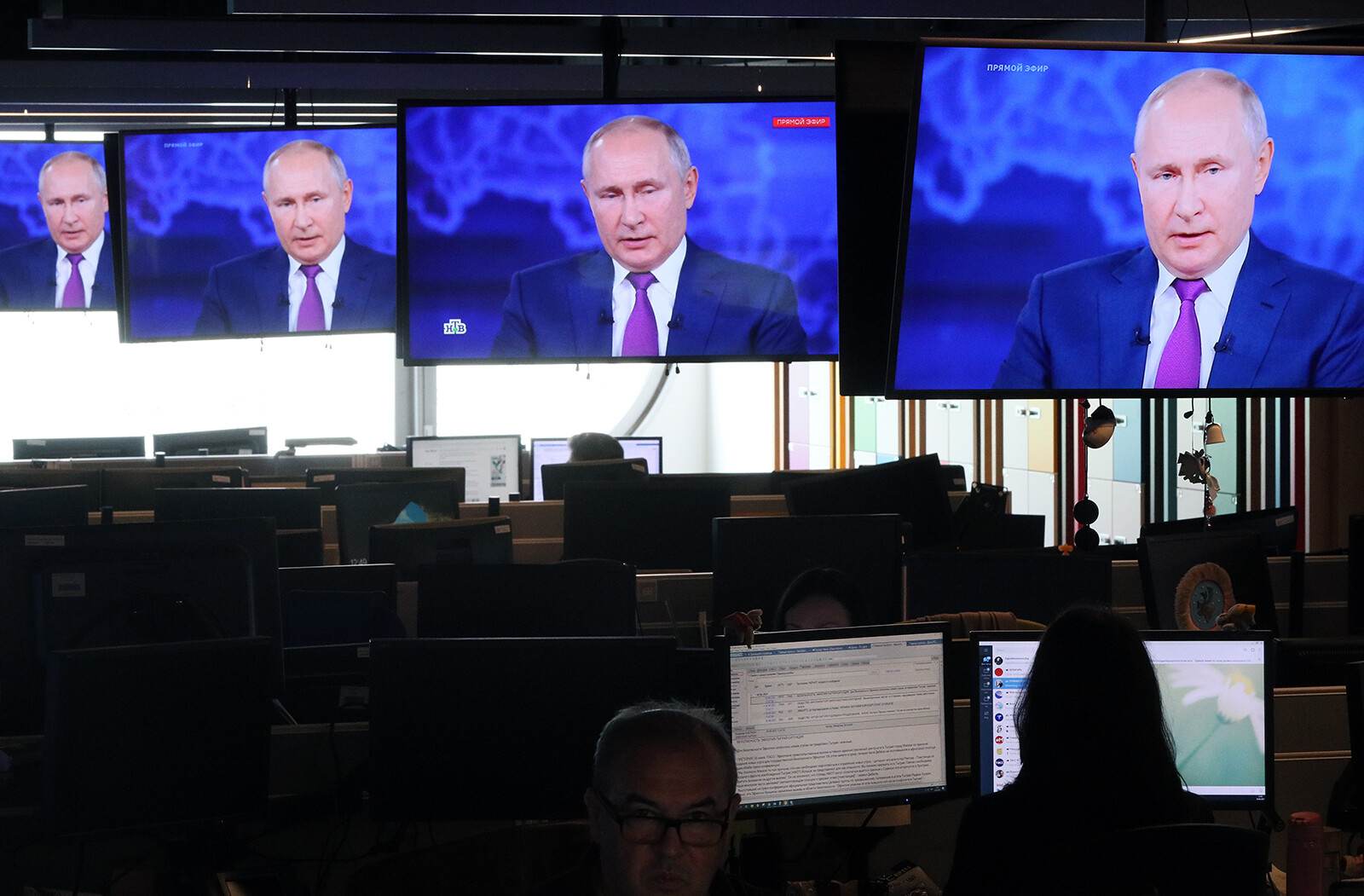 The staff of Dozhd, Russia’s independent TV station, were having a crisis meeting on 1 March at their Moscow offices when a member of their security staff  ran in, interrupting the meeting He told  them that the owner of the building had said that police special forces were on their way to the office. ”We had about three minutes to change the passwords, log out of our devices and just run,” said Konstantin Goldenzweig, a reporter.

That night Ekaterina Kotrikadze, the channel’s deputy editor in chief,  had rushed home after completing her personal television show at 8pm, to relieve her babysitter, when she heard that the online part of the television service that she worked for, called Dozhd, [Rain, in Russian] had been closed down by the Russian general prosecutors office. The danger signal for both journalists was clear – writes Nick Kochan.

“I was sure that my husband (the editor in chief Tikhon Dzyadko) and maybe myself, would be behind bars as well, if we didn’t leave the country,” said Kotrikadze.

The channel had refused to bow to government demands to call the Ukrainian attack begun a week earlier a ‘technical military operation’ and not a war. This meant they would be bound by a law being passed by the Russian Duma, giving the state the power to imprison them for 15 years for ‘fake news’.

Events now moved quickly as staff assessed they had no more than  six hours to get to the Russian border and safety outside the country. Konstantin made his way by car, bus and boat (as flights were prohibitively expensive) to get to Stockholm with his two children. Dzyadko and Kotrikadze found flights to Istanbul and then Tblisi in Georgia with their two children.

Their life as Russia’s most objective communicators was interrupted.  Now located outside their home country, staff at Dozhd look at how they can restore service.

These journalists  are adamantly opposed to the Russian war in Ukraine — they have insisted on using the word ‘War’, despite the prohibition on its use by the Russian authorities — while their public are writing to them in droves, by email, Instagram and text demanding the return of their station so they can learn the facts of the War.

Kotrikadze told me, speaking from Tblisi, “I have never had such a huge request from thousands if not millions of people who are asking me personally  to do something, to establish something, to give them information because they trust us. They are ready to watch us anywhere. This gives us a huge responsibility.”

Dozhd showed its determination to pursue independent journalism from its very earliest beginnings. It was founded in 2010 by Natalia Sindeyeva, a journalist and media manager, just a  year before protests at the regime of Vladimir Putin hit the streets of Moscow, in 2011 and 2012. Their coverage was widely viewed. ‘We covered these protests very attentively,” said Goldenzweig.

“We tried to be as objective as possible and we always tried to say what other colleagues in mainstream stations did not mention,” said  Goldenzweig.  This approach to news appeared to win some early support with leaders of the Russian government, such as Dmitry Medvedev, the President between 2008 and 2012, agreeing to be interviewed. The comparison with today’s repression is stark.

The first moves by the authorities to repress Dozhd came in 2014, when its coverage of the war in Crimea led to it being forced off terrestrial and satellite television carriers.

Alexei Navalny’s return to Russia on January 17 2021, from Germany, signalled the start of a new repression of the station. The opposition parliamentarian had been poisoned and successfully treated in a German hospital. A wave of protests hit the streets of Moscow and Dozhd made them its top story. Navalny was given a 3.5 year sentence in 2021 and a 9 year sentence in March 2022.

The station was removed from the Kremlin’s media pool of journalists after the Novalny trial. The journalists resisted the claim that they were Novalny supporters. ‘We were covering it [Navalny’s trial] as journalists and we were trying to get different points of view. When the rallies started in Moscow, we were there, we covered all the protests in Moscow and in different cities,” said Kotrikadze.  Dozhd gave more coverage of Navalny’s trial and the subsequent protests than any other media, she said.  Despite their removal from the pool, the offices of Dimitri Peskov, Putin’s press officer, and Sergey Lavrov, the minister of foreign affairs, whose point of view was given on the channel, kept in touch with senior Dozhd editors.

Pressure on the channel was ratcheted up on Friday August 20, 2021, when Dozhd was deemed an ‘enemy of the state.’  insinuating that the station was linked to foreign powers such as the US  Germany or the UK. It was a warning to viewers that they watched it at their peril. The channel continued to broadcast, as it had escaped the more damaging designation of ‘extremist organisation’  which would have resulted in a total ban. Kotrikadze said, “We could still go on with our jobs.”

The designation of ‘enemy of the state was spread across the alternative media. Meduza, for example, another independent media, was similarly dubbed, forcing it into financial difficulty. “Their partners pulled out. No-one wanted to be associated with a foreign agent,” said Kotrikadze. Another media targeted was Ekho Moskvy, an alternative radio station that was also extremely popular, albeit among a liberal core. It would be noted that audience levels for official state media greatly exceed those of these alternative voices.

Dozhd’s economics were more resilient as it was funded by subscription and had the means to push on. Indeed, the number of subscribers to the channel rose dramatically after it was designated a foreign agent, said Kotrikadze. Viewers to its YouTube channel likewise grew dramatically with three million at its peak.

Dozhd’s editors had made a point of maintaining contact and even coverage of the regime’s position over these months. But on 27 February, these links were abruptly severed. “Communication ceased with Peskov. I have texted him a few times asking him for an interview but he never came back to me. I had also been communicating actively with Maria Zakharova, the representative of the Ministry of Foreign Affairs. This too stopped”.

Kotrikadze had met Zakharova when she worked in media in New York. “She used to visit and once we even had a coffee together, just for a chat. I used to text her to discuss things, and we had normal communications, despite the fact that I hate her position and she hates mine,” she said.

The war on Dozhd staff turned vicious when the phone numbers of editors were leaked on social media. This triggered an avalanche of hate messages and contacts, many coming from those alleging to be followers of  Ramzan Kadyrov, the notoriously cruel Chechen leader.

“I doubt these people were indeed planning to attack me, to beat me or to kill me. They were just threatening me to make me even more anxious, annoyed… scared and it was a terrible thing. When your phone starts to ring for 10 hours non-stop, and you get text messages with threats against my mother, and myself, …well terrible things. They were trying to hack my social media. I had 1,600 messages attempts to hack my social media accounts everywhere,” said Kotrikadze.

The closure of the website on March 1 sent the final signal to Sindeyeva that the TV channel together with the social networks must close. To protect staff’s personal and other details, she wanted its entire presence erased.

“We had a big, last broadcast with us on Zoom and we said goodbye and we also said that we hoped it was a temporary decision, let’s see”, said Kotrikadze.

Dozhd’s journalists each have dramatic stories of their flight from Russia.

Konstantin’s exit from Russia for Stockholm was dramatic. “We couldn’t afford flights so we decided to go by car. The kids and I and another relative who drove the car up to the Latvian border. We found a border crossing, but thousands of Russians were trying to leave the country. There were huge queues of cars and pedestrians trying to cross by foot. So we found the most remote crossing in the middle of nowhere – behind some half-dead Russian village and woods.”

He continued, “Our relative brought us to the crossing point in the middle of the night. We took our luggage and walked over, first through the Russian border than the Latvian one. After two hours of the necessary procedures, we were picked up by an ex-colleague of mine who lives in Latvia, and she drove us through the night to her house in Riga where we spent the night. And then we went on to Stockholm by bus and train.”

Most journalists from Dozhd made their way to Georgia where entry was far from easy. Border staff interrogated them for at least an hour before admitting them. One was refused entry altogether. They received the clear message that they were not welcome. This can have come as little of a surprise, as the country is highly dependent on the Russian economy and has held out against imposing international sanctions.

“We know we are not welcome here. They don’t want this project to be settled here. We’re moving somewhere else.” Dozhd’s staff say they are considering a number of options  and have yet to settle on one.

Working for Dozhd had become a way of life for its journalists and they would not surrender it easily, said Goldenzweig. . “This was more than a business. This was a way of life. We had a sense of purpose. It was very painful to have to close it down. But it has become too important for us and for our viewers to not ensure that it returns, in some shape or form,” he said.