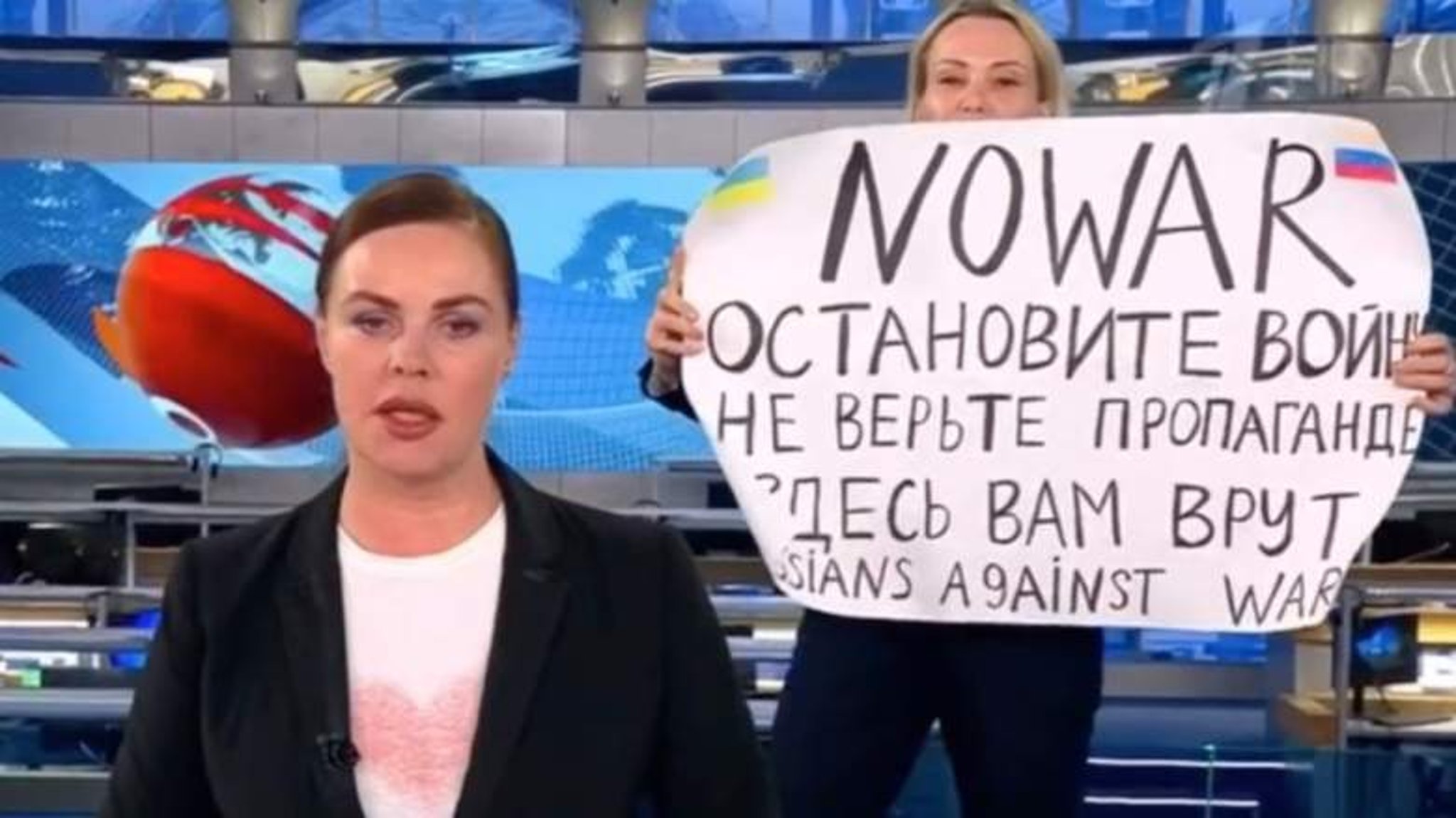 An interview with Marina Ovsyannikova: “A whole generation has grown up with
Putin’s propaganda”. Russia’s courageous journalist in private: “My son says I ruined the family’s life“

For six seconds, Marina Ovsyannikova held up a poster on “Vremya”, the main
news program on Russian state television, and became an icon for freedom of
speech and the press overnight. Those six seconds on live television would
change her life forever. Sven Lilienström, founder of the Faces of
Democracy initiative spoke with the 43-year-old editor about what
motivated her to take such a courageous move with concrete repercussions,
the minutes that followed, and how her family reacted.

*Ms. Ovsyannikova, in a matter of minutes, you became a global icon for
freedom of the press and freedom of expression, a champion of democracy.
What do democracy and democratic values mean to you personally?*

For me, democracy means being able to live as a free person. However, my
home country, Russia, has recently turned into a totalitarian state that is
increasingly closing itself off from the outside world. Communication has
been affected as well. Virtually all independent media outlets are blocked
or classified as “foreign agents” and most social media platforms are no
longer accessible. State-directed information propaganda is now almost the
only news sources for the Russian people, leading to an information vacuum
– which we have to overcome.

I have always enjoyed travelling and talking to many different people.
Therefore, democratic values are not empty phrases for me. On the contrary,
these values mean that people in Russia can exchange their views with the
whole world and express their point of view instead of living as obedient
slaves in a totalitarian country!

*Let’s talk about the sign you held up on March 14th during a live
broadcast on Russian state television. How exactly did it come about? What
happened immediately afterwards? How did your colleagues react?*

My desire to protest had been growing for many years. I disagreed with the
policy of the channel “Perwy kanal,” as well as with some other
developments that occurred and still occur in our country. The wish to
speak out was simmering inside me, but for personal reasons I could not
quit immediately. However, that changed abruptly with the start of the war.
It was clear to me that I could not work for “Perwy kanal” one day longer.
In the heat of the moment, I considered going to “Maneshnaya Square” to
protest, but at the last moment, my son stopped me.

I had the idea for holding up a poster the following weekend. I went to the
stationery store around the corner, bought a highlighter and some paper. At
home, I drew the poster. And by Monday, I knew: it was now or never. My
original plan was to place myself more in the background of the TV studio.
However, at the last moment I felt a strong “emotional impulse.” I decided
to run into the studio, cross a security barrier and stand directly behind
the presenter.

Everything happened in a flash. The security guard – a nice girl – had no
time to get her bearings, let alone understand what had just happened.
Nothing had anything like this happened in the 50-year history of “Vremya”.

After a few seconds, I left the studio, looking calm on the outside, and
walked down the central corridor. The entire management team of “Perwy
kanal” was already coming towards me. I had to make a written statement in
the office of the deputy director. Then the police, who had been called in,
escorted me to my office. The atmosphere was unreal. All the employees
present just stood there looking at me, completely dazed. They didn’t
understand what had happened. They didn’t understand how something like
this could happen at all.

*On the German talk show “Markus Lanz,” you said you wanted to wake up
Russians who had been turned into “zombies” by Russian propaganda. Do you
think you succeeded in doing that?*

Judging by the fact that most people around me think the same way I do,
it’s hard to judge how successful the campaign was in the end. My friends,
neighbors and acquaintances support me as much as they can. Many people
have written me or commented on my statement in social media. But when I
ask people why they don’t take to the streets, why they don’t take action
themselves, the answer is usually: “We’re afraid. It’s better not to get
involved in politics!”

*Since March 4th, Russia has issued prison sentences of up to 15 years for
unpopular reporting. What does this mean for journalism? Is it enough to
wake people up if they don’t dare to demonstrate?*

No, of course, that’s not enough! People form their opinions, but state
propaganda in Russia is very advanced. Just today I read in a recent poll
that 81 percent of people in Russia support Putin’s “actions.” I don’t know
if this poll result is true and if this data can be trusted. My perception
is that more than half of Russians do not support this war.

On Saturday, protests again took place in Moscow and many other cities in
Russia. Several dozen people were arrested, but the masses are keeping
quiet. People are really afraid.

Nevertheless, there are some – albeit few – people in Russia who are
willing to put everything on the line: their lives, as well as the lives of
their families, all in the name of active protest!

*You said you are surprised that you have not yet been convicted for the
poster you held. Do you think Vladimir Putin is using your media publicity
to portray himself as a champion of the rule of law?*

After my protest moment, the leaders of “Perwy kanal” kept silent for a
week. They did not know how to react. They screened me on the basis of all
available sources. And not only me, but my relatives as well. Only a week
later my direct superior Kirill Kleimyonov went public with a report
claiming that I was a British spy, which is totally absurd! Since then, I
have had the feeling that I am being watched at every turn.

Many people ask me the one question, “Why aren’t you in prison?” I think
that to some extent Russian propaganda is fine with me communicating with
Western media. It may be that my notoriety – at least at the moment –
serves the Kremlin’s interests. I cannot say what the leading FSB forces of
our country think. But there are active calls to put me behind bars. A new
administrative procedure was initiated, but two days later it was
withdrawn. Now my lawyers are waiting to see what charges will be brought.
We are waiting to see what will happen next.

*Relations between Russia and the West have reached a low point since the
Russia-Ukraine conflict at the latest: Do you think a “normalization” of
relations under Vladimir Putin is realistic?*

Absolutely not. Under Vladimir Putin, normal relations are impossible.
Russia has been engaged in aggressive propaganda against the West and all
Western values for the last ten years. During that entire time, people in
this country have been led to believe that the West is trying to destroy
Russia, that America and Britain are our enemies, and so is the Western
media. This propaganda is repeated in the “insane” shows on TV: there are
shows where Ukrainians are consistently labeled as nationalists and
fascists.

If they continually repeat that “black” is actually “white,” people will
eventually believe it. We have been very aggressive on television all these
years; in fact, there was state information propaganda in all the media,
directed specifically against the West. A whole generation has grown up
with Putin’s propaganda. It is simply terrible. I think that nothing will
change under Vladimir Putin. It will only be possible if a new generation
of leaders is elected, a generation that does not think within the patterns
of the Cold War. Only then will we be able to “patch up” our battered
relations with the West.

*Ms. Ovsyannikova, our seventh question is always a personal one: How did
your family and close friends react to your protest action on Russian
television? Were there people who advised against it?*

The situation is very difficult. My son, my mother and I have completely
opposite political views. My mother belongs to the older generation. She
listens to state propaganda from morning to night, listens to Vladimir
Soloviev. Therefore, it is impossible to talk to her or to convince her of
anything else. I have often tried to establish a kind of dialogue with her:
“Mom, I’m working. I know how to do it, listen to me…” But she doesn’t
understand anything, she answers using recited phrases from TV or radio.
Such as that the West is our enemy, that everyone wants to destroy our
country.

This is why I can’t talk to my mother for more than five minutes. We have
completely contradictory sets of values. When we start talking about
political issues, we always end up arguing. So, I don’t even try to talk to
her about it.

Even my son does not support me. He says I ruined the family’s life – also
because I got a divorce. In addition, his father – that is, my ex-husband –
works for another government propaganda channel, “RT.” So we are on two
opposite sides of the information war. He fully supports the Kremlin
propaganda. I, on the other hand, have more liberal views. Accordingly, my
ex-husband teaches our children his values, while I try to give them a
different perspective.

Fortunately, my daughter is still small. She does not understand the
political connections. But she senses what is happening right now in and
with our family.

*Thank you very much for the interview, Ms. Ovsyannikova!*

*About the Faces of Democracy initiative:*

To date over 1.000.000 people in 50 countries have signed the online
commitments of the Faces of Democracy and the Faces of Peace. More than 100
prominent figures from the world of politics, media, business and society
are now committed to our democratic achievements – including numerous heads
of state and government, Nobel Peace Prize Laureates, the publishers and
chief editors of leading media publications and the CEOs of international
companies.

*The Faces of Democracy and Peace in alphabetical order:*